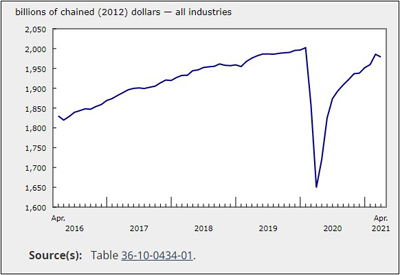 Real gross domestic product (GDP) contracted 0.3% in April after 11 consecutive monthly increases. With the first decline in 12 months, total economic activity remained at about 1% below its level before the COVID-19 pandemic in February 2020.

Preliminary information indicates a decrease in real GDP of approximately 0.3% in May. The retail trade, construction and real estate rental and leasing sectors contributed the most to the declines, while the finance and insurance, and wholesale trade sectors posted gains. Because of its preliminary nature, this estimate will be revised on July 30 with the release of official GDP data for May.

Retail trade retreated 5.5% in April, dampening the previous two monthly expansions, as 10 of 12 subsectors were down.

Many provinces and territories reinstated tighter public health measures in April aimed at slowing down the third wave of COVID-19. These measures largely curtailed the strong “non-essential” shopping seen in March.

Food and beverage stores (+0.5%) and miscellaneous store retailers (+0.5) were up, offsetting some of the declines.

The construction sector rose 2.4% in April, up for a fifth consecutive month, as all components increased.

Real estate, rental and leasing contracted 0.7% in April, down for the first time since October 2020.

The output of offices of real estate agents and brokers dropped 10.6%, as home resale activity in the majority of Canadian urban centres, mainly in Ontario and British Columbia, slowed in April.

Durable manufacturing decreased 1.8% in April, following a 2.1% increase in March, on declines largely concentrated in transportation equipment. The subsector was down 8.6% as the global semiconductor chip shortage contributed to production disruptions in motor vehicle (-20.9%) and motor vehicle parts (-13.4%) manufacturing industries.

Non-durable manufacturing edged down 0.2% in April, as five of the nine subsectors were down. Contributing the most to the decline was plastics and rubber products manufacturing (-6.4%). Lower demand from motor vehicle and motor vehicle parts manufacturers partially contributed to this decrease. Petroleum and coal product manufacturing contracted 3.3%, as some refining facilities suspended activities for maintenance in April. Offsetting some of the decrease were gains in chemical manufacturing (+3.4%) and food manufacturing (+1.5%), which recorded a notable increase in seafood product preparation associated with an early start to snow crab fishing in April.

Mining, quarrying and oil and gas extraction up

Mining, quarrying, and oil and gas extraction grew 1.4% in April, as all three subsectors were up. The gain in April came on the heels of a 1.7% increase in March

Mining and quarrying (except oil and gas) rose 1.5% in April, following a 2.4% gain in March. Metal ore mining (+3.0%) led the growth, as iron ore (+5.9%) and copper, nickel, lead and zinc mining (+4.8%) made the largest contribution to the growth. Coal mining increased 1.8% in April, while non-metallic mineral mining declined 2.4%, mainly as a result of lower potash and diamond mining.

Support activities for mining, and oil and gas extraction grew 7.9% in April, as all types of services were up.

The public sector (educational services, health care and social assistance, and public administration) grew 0.3% in April, as most components were up.

The health care and social assistance sector rose 1.3% in April, up for the 12th month in a row, with ambulatory health care services (+2.4%) leading the growth.

The educational services sector declined 1.3% in April, driven by a 3.0% decrease in elementary and secondary schools. In 2021, the Government of Ontario moved the annual spring break from mid-March to mid-April to limit the spread of COVID-19. This decision led to an atypical decline in output, resulting from the one week less of class in April.

Accommodation and food services declined 4.6% in April, following the reintroduction of lockdown measures across many parts of the country to combat the third wave of COVID-19.
Food services and drinking places contracted 6.5%, as activity across all forms of establishments decreased in April.

Despite continued domestic and international travel restrictions, accommodation services rose 0.5% in April. A decline in traveller accommodation was more than offset by an increase in activity at recreation vehicle parks and recreational camps and rooming and boarding houses, with camping continuing to be an alternative to international travel for Canadians during the COVID-19 pandemic.

The finance and insurance sector declined 0.6%, as credit intermediation and monetary authorities (-0.5%), financial investment services, funds and other financial vehicles (-1.5%), and insurance carriers and related activities (-0.4%) were down.

The utilities sector was down 1.2%. Warm weather coupled with reduced industrial and commercial output contributed to declines in electric power generation, transmission and distribution (-1.3%) and natural gas distribution (-2.4%).

The wholesale sector edged down 0.2% in April as a 7.0% jump in building material and supplies wholesaling and a 0.9% increase in personal and household goods wholesaling were more than offset by declines in the remaining seven subsectors. 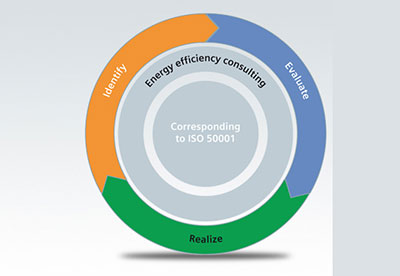 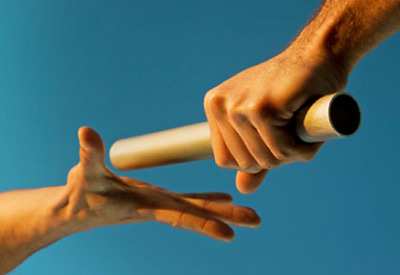 We simply don’t have enough people in the talent pipeline. There are two key drivers causing this pressure. The first is the demographics issue that is challenging not only for us but for most industries across the country. We have an aging populace and a large number of employees taking retirement. The second relates to the infrastructure changes that will take place over the coming decades.

Contractors took out $6 billion worth of building permits in March, down 3% from February. The March decline followed an 11.3% decrease the previous month. Lower construction intentions in the non-residential sector in six provinces, led by Ontario, more than offset a gain in the residential sector.

Canadian Electrical Wholesaler’s Bi-Monthly Digest is distributed on the first and third Thursday of each month.Please download any of our past issues using the links below. 2022 Canadian Electrical Wholesaler Bi-Monthly Digest Supply Chain / Team Selling / Copper Rod Mill Update September 15, 2022 Change is Coming / Small Scale Robotic Automation in the… 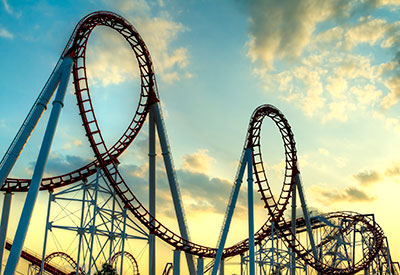